A Time of Change

Again I have been a terrible blogger but having a stunningly perfect summer kept me away from the computer and of course writing A Cornish Stranger took priority. I did post loads of photos on my Facebook Page here. It was the most glorious summer, in fact just like the summer I wrote about in A Cornish Affair. When I was editing A Cornish Affair last summer I had wondered if I had dreamt it all up (wrote the first draft of ACA in the fall of 2006 & winter of 2007 and the summer of 2006 was wonderful so it can happen!).

So now it's September...DS2 is about to go to university (he did incredibly well in his exams). Tomorrow he and I take the train to Leuchars (nearest station to St Andrews). And I will then have two at university! How life changes... 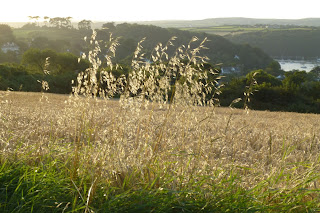 And I have begun to edit A Cornish Stranger (which is due to my editor on the 31st of October and due out in May 2014) and this is a big change too. I haven't quite finished the rough draft. I know the ending, it's all in my head but the book has changed so much that I need to 'live' it before I can make the ending as strong as it can be.

This book has given me nightmares. It began from a saying I found in my research for A Cornish Affair...save a stranger from the sea, he'll turn your enemy. I began writing the story for NaNoWriMo in 2012 just to exercise my writing muscle and had 10,000 words. My editor like the idea so that was chosen as book three. So we brain stormed the idea and she saw potholes before they happened...and I had a rough outline. This was totally new. In the past I began with a vague idea, a title, and a character and wrote until the end - plot holes and all.

This time has been very different and I'm of course doubting myself and the story (which my dear friend Biddy tells me is part of my process and I do it every time!). So fingers crossed the magic will happen in the editing and A Cornish Stranger will shine...

Oh, I forgot to mention opera...yes, there's a huge opera thread in the story which has been a wonderful excuse to listen and learn more about opera and its world but terrifying as I have to put together a Cornish opera (not the music) but the score of one so that parts of it can be in the book! i certainly don't make things easy for myself!!!

PS there are a few days left to enter a Goodreads give-away ... 3 copies of A Cornish Affair to win here.
Posted by Unknown at 8:32 AM 4 comments: