Penderrown has been moving fairly well but yesterday I hit one of the points where I started looking on ebay, reading blogs, tweeting.......finally closed the computer coerced dd into trying some gardening. After trying to keep her on task for more than five minutes I gave in to the sun and plonked onto the sun lounger with the current read - Nicholas Sparks True Believer.

Now I woke at five this morning determined to achieve at least 1000 words today. It is now 9:15 and I have written 72 and deleted 20. I am still at that impasse. Demi has an issue and a developing relationship is going to force her to face this. You see she can't lie very well,doesn't want to lie, and can't quite get the words out of her mouth - and the relationship is compelling her into it. I have set the scene - romantic cliff top picnic and boom - stop dead.

Why? Well,I suddenly wondered is this time to force her into this corner? Is it the right in the story or for her? Does it fit with the other events taking place? Is this just too soon for the reveal? Does it work with the bloody time line i set up (won't actually knwo this until go back and reread - confession here - I have forgotten some of the stuff I have written)? If I make her face all this now what is left?

So I turned to blog land again - just hoping for something that might trigger something - well anything to be truthful. Low and behold Michelle Styles came up trumps again:

I went and picked up McKee again. He makes the point that character and structure are interdependent on each other. You are designing events to reveal character and so it is a matter of personal choice whether you choose to work on the structure or the character but character and character change cannot be expressed except through the events in the story and the characters' reaction to that story. True character is the choices that people make when under pressure and the pressure can only happen from events that require characters to take bigger and bigger risks.

Her words gave me another way to look at it which far more sense to my addled brain. Michelle frequently posts on 'craft' and almost always she hits the nail on the head for me.

And another link which totally justifies my lounging in the garden yesterday. Relax from Anita Burgh
Posted by Unknown at 9:14 AM 2 comments:

Where I Work and Links 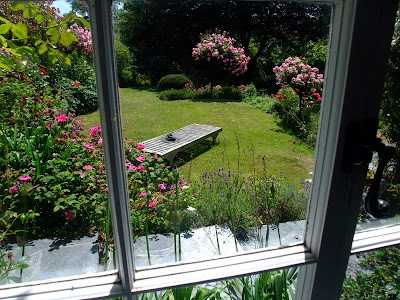 Two great links today. One for sheer enjoyment - Ben Johncock's blog for The Bookseller had me laughing into my coffee this morning. I had never thought about the comparison of a writer's 'study' to 'the bedroom of our youth' but it's so true.........books, pictures of things that inspire (gorgeous men - for research and inspiration only I hasten to add, exotic locations, words of wisdom..... ). Of course I have a dream study in mind, but generally work on the dinning room table where everything gets swept into a drawer at the end of the day and here in Cornwall I sit in a large red arm chair with my back to the window overlooking the garden as I would never write a single word!

The other link is from agent Jenny Bent on her blog. It's a timely piece (pun intended-see blog) on making your luck by keeping aware of the market, but still writing the book of your heart. Now off to check out if August Rock might not fit the bill that she was talking about with a little tweaking!

Pleased to report that I am writing. It may well be crap but at least the word count is climbing and the plot seems to be moving forward. I haven't yet figured out to tie it all up into the ending I want yet but somehow I'll get there (or at least I have in the last too books!).
Posted by Unknown at 12:18 PM 7 comments:

Oh What a Night and Links 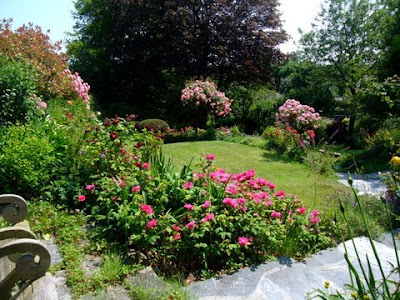 You know when you are in light sleep and the noises of the night invade your head...well in an old house like this one the sounds are many. In fact I can usually pick out the ones made by the general creaking of the building to the ones made by living things. So at roughly two am I hear a fluttering sound and begin to wonder if birds have managed to nest in the chimney again (some time ask me about the nesting rooks that I had to evacuate). So with eyes closed I tried to imagine which ones could have broken through the defenses at the top. They must be small I thought. Yet the noise seemed closer than the chimney (the cob walls provide tremendous insulation and a small bird shouldn't be heard fluttering). 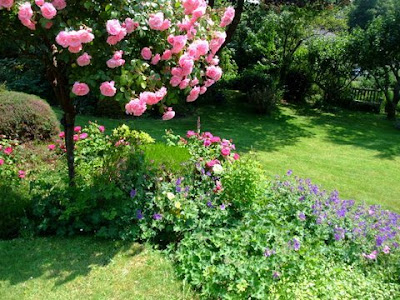 As DD and I are here on our own she was snuggled up beside me in the bed sleeping so soundly as children do. I rolled away from her and opened my eyes. They adjusted to the dim blue light coming from the alarm clock and there hovering above the bed was a small bat flying in circles.

First reaction was to slide totally under the duvet or run from the room but I couldn't do either because of DD. I looked to the window which I had left open about two inches. This had to be where the bat had come from so with small pillow on my head I dashed and opened it as wide as I could then flung myself back under the duvet leaving the pillow in place. I lay there trying not to listening to the beating of winds going round and round. I prayed that my guardian angel would help this creature back out into the night where it belonged. I pressed the pillow closer to my ears so that I wouldn't hear the noise. I worried about bat droppings - do they have droppings? Do they carry disease? Then my mind went to vampire bats as the mind at night is a funny thing and DD had been reading the directors notebook for TWILIGHT before falling asleep.

Finally the beating of wings stopped and I removed the pillow from my head. I didn't know the time since I had hidden the light from the alarm clock as the eerie blue light didn't help my wandering thoughts....

Despite this I was still up at five! I don't think DD want to know what hovered over her in the night or she will be truly spooked.

I haven't written in ages which is bad, but I am hoping that the typing time off will have given the old brain a chance to build. I am about 20k from the end of the story. As it stands it is Victoria's story (remember she was my villain) which is okay with me. Her journey has been fascinating thus far and this is a very dirty first draft.

This leads to a few links and I won't introduce them as they are too numerous as I haven't posted any in ages.

The Ten Commandments of Becoming a Published Author from Julie Cohen

From Nina Harrington a fantastic site with so much I won't link to just one part but the whole (however the first posts are great on first drafts....Billy Mernit
Finally I am totally in love with my garden right now. For the past few years I haven't been here to see the roses in their full glory and it is such a treat.
Posted by Unknown at 5:59 AM 17 comments:

Just popping in quickly to say I won't be around for a few days until I arrive in Cornwall.
Posted by Unknown at 5:13 AM 7 comments:

The New Me - The Super Me 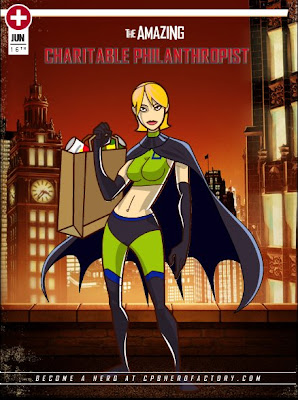 What can I say? When the going gets tough - the tough get shopping! No, seriously, things are mad here getting ready for summer exodus. Not writing. Not acheiving much but keeping head above water. DD is having leaving birthday/leaving party on Thursday and I'm taking six ten year girls to Wild Wadi. My new Super Hero me will come in very handy but may get a few strange looks!
If you're in need of super powers and I know you arehere's the link.
Thanks for the link Fiona and Liz
Posted by Unknown at 4:31 PM 8 comments:

Amsterdam Visited But Not Discovered 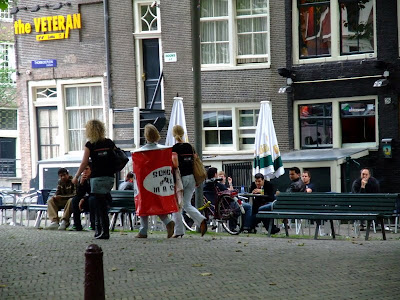 The trip didn't start well with luggage enjoying the sun at Gatwick while we were in the pouring rain in the conference hotel in Amsterdam.
However once the the bags arrived we ventured into the heart of Amsterdam and that is where this first photo is taken - no comment.
Other than that first meal I didn't really see the city which is a pity however the weather was dire most of the time. Fortunately one evening we were treated to an evening sailing on the Ziederzee 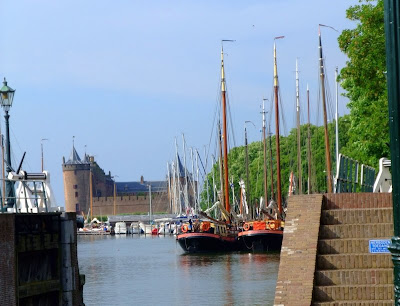 .
Simply magic.
The boat was built in 1849 and the interior was rich in the patina of old wood. Once on the Ziederzee we made way only with sail power and the peace of watching the sun set was bliss.
A lively three piece band played music that included a sing-a-long.
A fantastic evening and one that made up most of memories of the trip as the remainder of the time I was working at the conference. 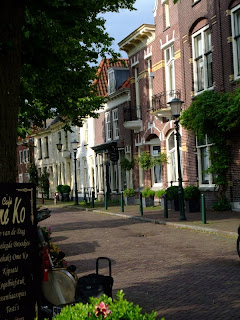 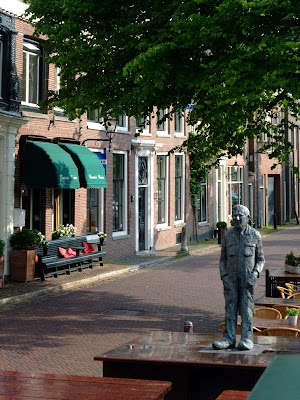 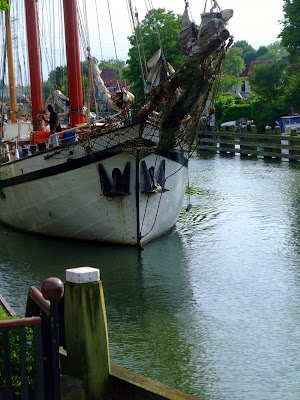 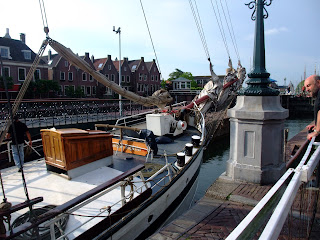 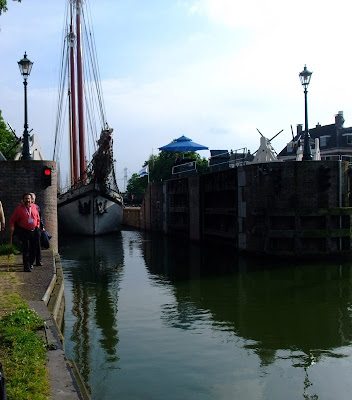 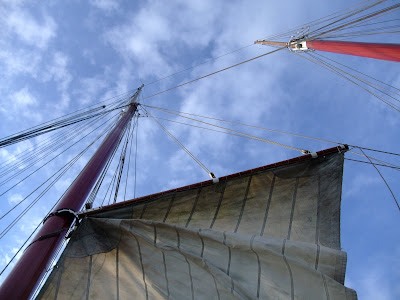 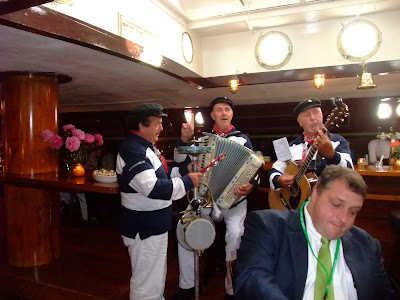 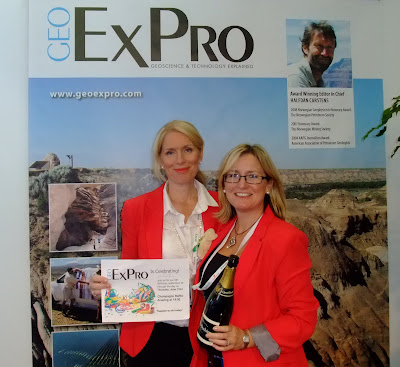 I've been doing something totally different this week. I've been at a conference helping a friend with her magazine Geo ExPro. They were celebrating their fifth anniversary - hence the champagne. I didn't see much of Amsterdam but the weather didn't help that. I did have a wonderful evening out sailing and I'll post the pictures of that tomorrow.

I have the fun task of compiling the the monthly list of publications for Romantic Novelists' Association (RNA). I was late doing this moths list because of netbook problem (ahem). So as I did this moths list I was struck by the diversity of the list. On it you have some big names - Jill Mansell and Katie Fforde and you have some newer writers as well. You have international publishers, US , e -pubs cover the light to the gritty. So I thought I would publish this months list here......enjoy the diversity :-)

Victoria Connelly - Molly's Millions
Allison & Busby
£6.99
A fast-paced love chase about a lottery winner who gives it all away.


Monica Fairview - The Other Mr Darcy
0709088116 Robert Hale
June 30 - £18.99 (now on discount for £13.99 until the end of June from Robert Hale)
An Austeneque romantic comedy: Caroline Bingley is heartbroken at Darcy's wedding -- and caught in an embarrassing situation by Darcy's American cousin.


Kate Jackson - Reach for the stars
People's Friend June 13, 2009
78pHannah has no idea what to expect when she accepts Jack's strange invitation.


Louise Allen-The Society Catch in Regency High Society Affairs vol.4
978-0-263-87551-5 Harlequin Mills & Boon
June 2009 £6.99
Rather than face a loveless arranged match Joanna flees, and it is Giles Gregory, whom she has always loved, that her mother asks for help to find her.