What a day....touring my favourite part of Dubai, the Bastikya, and then Face2Face with Jeffrey Deaver as part of the Emirates Airlines Literary Festival.

During our Bastikya tour we visited the mosque or as we were enlightened masjd....our guide continued to educate us in such a humorous way that I had to write some of descriptions down... 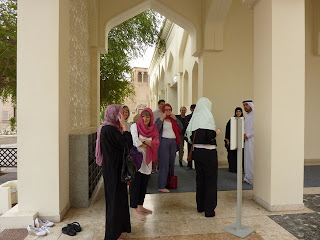 His tour continued in this manner...


We stopped by the most wonderful art gallery in Dubai, theMajlis, on our way to lunch at Bayt Al Wakeel for a delightful creekside lunch of Arabic mezza.

After lunch the group split into sight seeing and shopping - guess who led the shopping party?

I had such a brilliant time that I didn't think it could get better but I was wrong...despite the threatening weather and dire traffic the event at Al Mamzar was fabulous, but then how could anything with the James Bond dazzle not be so?
The evening began with a fabulous clip of all the Bond films, a stunning rendition of several of the Bond themes and then the man himself Jeffrey 007 Deaver talking about the experience of writing Bond and why Dubai. 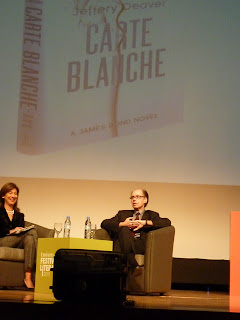 I took some notes and as always your scribe is totally fallible (apologies in advance)....
When Deaver was visiting for the festival last year and as he does when ever he travels, he has a notebook and a camera. He spent many hours wandering Dubai, chatting, looking and enjoying....He became 'enamoured' of the city and felt he would use it as some point in his writing but had no idea when...
So when he was approached to write the next Bond book he debated it for all of seven seconds before saying yes...
Then his Dubai experience came into play ...an exotic city worthy of James Bond....
He says the book is true to Dubai and to James Bond....Dubai had left an indelible impression on James and James on Dubai...
This book takes Bond into the current day so Bond is born in the 1970s and as it's current - things have moved forward be the heart of the story is still the same...it will be true to Fleming's legacy but also a Deaver book
He said the Fleming books were the textbook of how to write a thriller -
-get into the story right away
-the authors job is right from the first page and each one there after to the end to keep the reader wondering what will happen next
-you can't be a lazy author...something on every page
On a general note he says books must have an emotional resonance with readers. Readers must be able to emotionally connect to characters - good and bad.
He says he is a craftsman and works 8 to 10 hours a day. If he has a gift it is a vivid imagination  and empathy with people. He wants to please and to scare. He writes for his readers. About 10% of his ideas make it into his books. He writes entertainment. 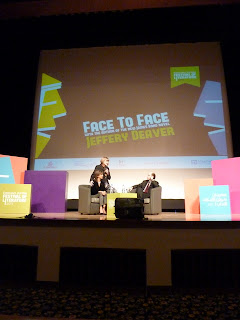 He wants his readers to say 'I enjoyed that. It was fun."
He cautioned that every character has to have a sense of depth to enrich the reader's experience. There is no emotional connection if a hero defeats a soulless villain only if the hero has beaten someone who is smarter and more ruthless...so when the hero prevails the resonance is that the reader feels good.
He wrote his first novel at 11. There are no writing prodigies unlike music ones. You need to live life and experience things. It takes him one year to write a book...eight months to outline and research. This outline begins with one sentence and grows to 150/175 page outline. he will then write the book in two months - 10 hours a day = 40 pages...
..good writing doesn't have room for self indulgence, writers must be craftspeople and think of our audience...good story telling is utmost
Two rules for research:
1. Get it write - nothing pulls a reader out of a story faster and ruins there enjoyment of the book
2. Don't use everything you find maybe just 10%...the reader needs to turn the pages as quickly as they can don't slow them down 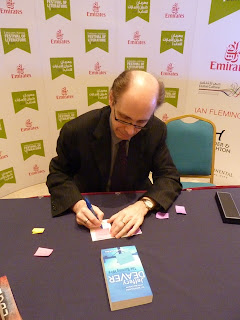 I'm exhausted just typing this all up....but even more excited about the upcoming festival. The programme was published today here. Some many choices and so little time....

Sorry I haven't been here in a while and I won't bore you with the details. I will say I'm so excited to be involved with the Emirates Airlines Festival of Literature (web page here) this year and tomorrow I get to meet Jeffery Deaver (more details after the event). However I might yell at him as he was responsible for me losing sleep last night.

I may be the only one, but I feel if I'm meeting an author for the first time I like to read their work if I haven't before.  So as I don't normally read crime/thriller novels (that is DH's department) I began one of Deaver's last night. Mistake. Page turning, sleep depriving....

He's here because of Project X  and I will be attending Face 2 Face with Jeffrey Deaver...

ps...in the opening ceremony of the festival last year Deaver read his poem 'The Death of Reading'. here's the first stanza:

I’ve got what I think is the very best job.
I have no commute; I can dress like a slob
I get paid to make up things-isn’t that neat?—
Just like at the White House and 10 Downing Street

You can find the rest of it here.

pps...do you think I could disguise myself as a Bond girl?
Posted by Unknown at 8:16 AM 3 comments: