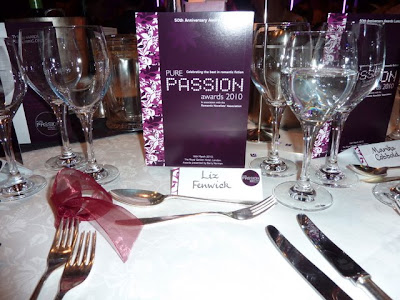 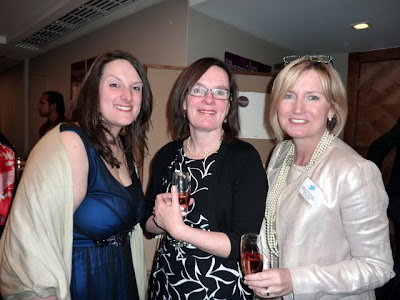 I have had terrible time trying to connect to the internet due to dongle difficulties and have been trapped (happily) in new flat waiting for deliveries. This morning I'm sitting a cafe with brilliant wifi!
The lunch was amazing.....truly amazing. I snapped away and most of the photos will go up on RNA Blog this weekend but here's a few for now.
(l to r Miranda Dickinson, Julia Williams and me)
Posted by Unknown at 9:05 AM 9 comments:

I slipped into the opening ceremony trying to find short listed author Rachel Hore and i had no idea what delight I had in store. After the short welcoming speeches from Maurice Flanagan and Isobel Abulhoul, came some Arabic poetry and I will confess here to being a bit concerned that not having had that second cup of coffee that I would gently nod off – not a chance. Despite having the headphones for instant translation, I was spellbound with the sheer magic of the ‘melody’ of the language that Khaled Al Budoor read. I was entranced and enchanted. Next the poem was read in English and I expected disappointment to settle on me very quickly but no – Fadhil Al Awazzvi’s delivery was entirely different and completely compelling. Towards the end of the poem he was amazingly animated and his delivery reminded me of a moving plain sung mass.
I was feeling that nothing could top this and wondered why I had left the joys of poetry back with my university days. I was unprepared for the delights of crime writer Jeffrey Deaver’s poem ‘The Death of Reading’. Each stanza contained a surprise a twist and turn which I suppose would be expected from a crime writer, but in prose not in verse which owed much to Dr. Suess. It was brilliantly light.
I hope he won’t mind if i print the first stanza:
I’ve got what I think is the very best job.
I have no commute; I can dress like a slob
I get paid to make up things-isn’t that neat?—
Just like at the White House and 10 Downing StreetNext Paul Blezard and Fadhil Al Awazzi read out their chosen favourite opening lines – English and Arabic. It was a lesson definitive in how to begin a book.

Unfortunately I slipped away before the final and I am reliably told I truly missed out on one of the highlights of the day – and I find that hard to believe as yesterday was so full of highlights.

The atmosphere this at the festival so far is buzzy yet calm – the organization is going so well. Authors seemed relaxed and are to be spotted wandering about enjoying the scenery and attending the sessions as I was delighted to discover. The children’s author Michelle Paver was seated beside me for the first session of the festival – Reading the Future: Emerging Emirati Children’s Writers. More about this later.

Have just had the most fabulous morning introducing Michelle Paver and Garth Nix and I was able to watch the magic that Roger McGough wove about the children with poetry– more about these later.
Posted by Unknown at 10:10 AM 7 comments:

Now For Something Completely Different 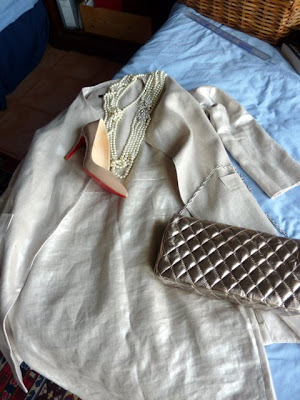 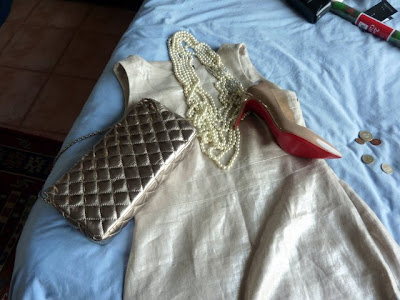 Over on Twitter the lovely @CraftyFushia has been kind enough to be interested in my wardrobe dilemmas for the glamorous 50th Anniversary RNA Awards Lunch. This year it has been a real problem, but a delightful one as I have lost a substantial amount of weight (some day I'll tell that story) and well, to put it mildly nothing fit. It was therefore my duty to prowl every Mall Dubai has to offer in order to find something sufficient glam and flattering.
Well, I came up with three in the end and as nothing else in the wardrobe fit I really had to buy all three, but one is head and shoulders above the rest......
What do you think? Can't show you the other two as they are still at the tailor's being taken in.
PS I'm also having coffee with one of the short listed authors - Rachel Hore, tomorrow who is here for the literary Festival
Posted by Unknown at 12:42 PM 7 comments:

Yesterday I promised to blog about my recent struggle with rewriting a synopsis so here I am. First I want to post two links that have helped:
http://anitaburgh.blogspot.com/2010/03/cpt-and-synopsis.html
http://www.publishabestseller.com/2010/03/680/
I read both before I began work on the synopsis for A Cornish House. For me the thought of condensing 100,000 into one page is a nightmare. I actually find the one sentence thing easier so that is usually where I begin.
Back when I was struggling with my first synopsis, a wise soul told me to write it as if I was explaining it to a friend. This I did and the story was condensed - it was a mess of ten pages but it was better than a blank page. Since that first one, I now find my first pass is about four pages and here is where the work begins - the cutting.
First cut - the things I mentioned that aren't central to the book- I lose about two pages.
Second - am I saying things concisely or am I rabbiting on? -another half page gone
Third - down to the nitty gritty - word choice, adverbs, names.....
example:
Maddie uses a strong antibiotic to tackle dysentery. The diarrhoea disappears but the nausea remains. Maddie checks her diary and realizes that she must be pregnant.
Maddie falls ill. Other symptoms disappear but the nausea remains. Maddie is pregnant.
So having already brought the synopsis of ACH down to a page ages ago, what value have the past few days' agony brought? Well, I hope a stronger synopsis, but also a closer look at the story. When I had disciplined myself and whittled it down to just the main action I noticed that Maddie was accepting a lot of things = things were happing to her and she was reacting but not acting - so did I have a limp heroine or a limp synopsis???? This was a headache inducing question. I know what I wanted the answer to be but what was the truth....still checking this.
I also had to accept that I couldn't tell the story chronologically and have it be an effective synopsis. This really bothered me, but I had to get past the keeping the secrets of the book until they were revealed in the plot order. Once over that hurdle it made things a lot easier.
The final stage is to make sure that the document still makes sense as it stands. When I am so close to something it is very easy to think - yes, that works when it doesn't. I know this book inside out well at least I had better, but who ever reads the synopsis doesn't have that luxury. So I have to step back and read it without knowledge (not easy) and ask the questions:
1. have I told enough?
2. have I told too much?
3. does it make any sense?
4. does it actually tell the story that is written? (very important)
So today I am doing yet another pass and I don't think I am quite there but I still have time - thank God.
Posted by Unknown at 5:18 AM 8 comments:

I Am Alive - promise

It's been a long time since I've been here - sorry. I could give you explanations, but I don't want to bore you.
So rather than looking backwards I want to look forward. Next week bring the Emirates Airlines Festival of Literature to Dubai and no of course I'm not excited - hah. Can't wait. This has been marked on my diary since they announced the dates last year. The only downside is that I won't be here for the whole thing - no, only two days, in fact missing the main days. However this is balanced with the fact that I will be in Cornwall a week from today and will be celebrating the christening of my great nephew - I do keep telling my niece I'm not old enough to be a great aunt but she just laughs....
Then the week beginning 15th March - well, a dream comes true. We complete on a flat, or more correctly a shoebox in London. When DH and I sold our flat in London 21 years ago I never thought we would be able to have a foot hold in London again, but dream do come true and from the 15th we will have just that a foothold or a shoe box which should make this crazy traveling life of mine much easier.
On the 16th of March it is the glittery affair - the RNA's Romantic Novel of Year Award Lunch! This years it's even more glam as it's the 50th anniversary. The stress of what wear and what shoes to wear has nearly done me in.
Now there is lovely link back from the lunch to the lit festival as one of this year's short listed authors, Rachel Hore will here at the festival!
Now have made that nice link I will give you another one or rather two which go together nicely. The are one making your hero likeable....
Sarah Duncan
Guide to Literary Agents
Finally I'm polishing up the synopsis for A Cornish House for two pitch sessions a the York Festival of Writing. I will try and blog the process about tomorrow as it has been an interesting exercise but right now I am off to read Chapter One again to make sure I saved the cat!(see above links)
Posted by Unknown at 1:28 PM 3 comments: