Wow What A Festival...but it's over

I am suffering from withdrawal symptoms from the Emirates Airline Festival of Literature and facing the overflowing inbox and piles of laundry....

But I will hold onto the magic of the festival for a long time or at least until next next year...and I made the front page of the Gulf News...well I'm pictured there with HH Sheikh Mohammed. The evening of poetry under the stars was magic enough, but then to have HH arrive well, that made it sparkle a bit more. I have been close royalty before. I have tread in divots at Smith's Lawn with HH Queen Elizabeth II but somehow listening to poetry in the desert with a sheikh is far more interesting...here's the link to the picture here.

So of course the best thing to help with my withdrawal symptoms is...another festival...Chipping Norton Festival Literary Festival is in April. I'll be able to listen to many great author tell their stories and share their skills and I'll be able to share what I've learned this week.

Throughout the Emirates Airline Festival of Literature, I chatted to so many authors and one thing became clear...many are either scared of or don't see the point in Social Media....My session with Dubai Abulhoul on Thursday evening was about how Social Media is vital in today's book publishing world.

So many interesting things came out of that session...one of the most important was how different regions use Social Media. I'll be sharing these insights and plenty more that I have learned on my journey from unpublished writer to published one at the Chipping Norton Literary Festival on Saturday the  20th of April 2013....for more details go here.

So I need to bide my time, begin another book and plan my workshop until I can live in a literary world again...
Posted by Unknown at 10:51 AM No comments:

Day Three at the Emirates Airline Festival of Literature

Yesterday was amazing and because today is so full on I don't have time to say much but I'll post a few pictures....

My session with the most amazing sixteen year old I have ever met, Dubai Abulhoul was fabulous...and not because of me...it was the electric atmosphere in the room filled with Dubai's friends. The room was packed and our moderator Hisham Wyne was superb as always. I can't recall ever having quite so much fun while being in the spot light. A huge thank you to all who bought The Cornish House and came for a chat after the session!

Sitting next to me at the signing table was the delicious (for there is no other word except maybe wonderful) for Antonio Carluccio...and we chatted about how glorious Cornwall is...the picture below is me with him in a total fan girl moment!
There are more pictures on Facebook here
Posted by Unknown at 5:34 AM No comments:

Last night was simply amazing...listening to poetry from around the world under the stars in the desert....and a bit of camel riding before hand while we watched the sun set. We also hand a royal visitor too... 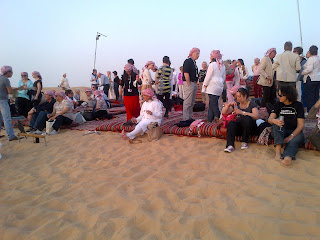 There are more pictures up on my Facebook page here
Posted by Unknown at 3:52 AM 2 comments:

Just before the opening ceremony of the festival we have the pleasure and privilege to watch these beautiful girl dance for us...my photos don't do them justice. 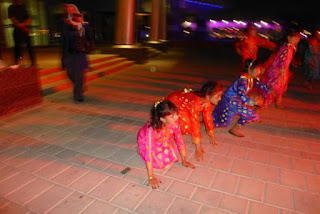 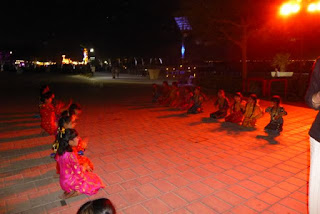 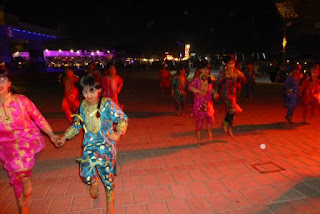 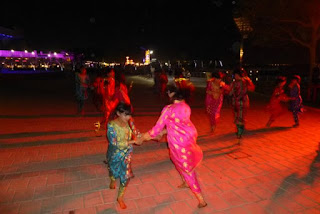 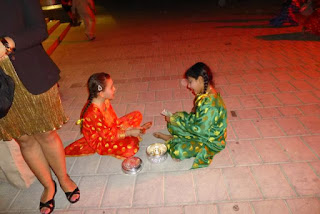 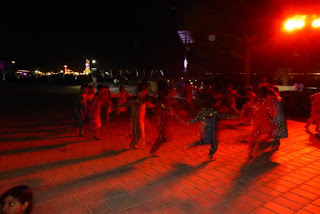 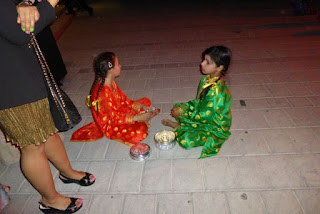 And now for something completely different...this morning I spoke at the Old Library. They were a wonderful group of women with brilliant questions.... 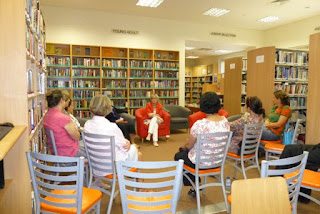 Then I raced back to the Intercontinental Hotel for the author photos... 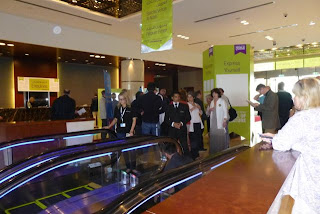 Tonight we are off to the desert to hear poetry under the stars...but before that I'll be spending the afternoon driving through the dunes and might meet a camel or two....
Posted by Unknown at 10:27 AM 2 comments:

I can't believe this is the festival's fifth year and I have been lucky enough to be at everyone of them and as an attendee, a volunteer and as an author! 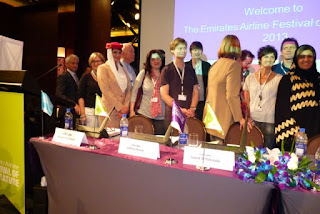 Back at the first festival I took in so much information I nearly popped. I fed my soul with words and advice.

The second year I was on hand to help out with Education Day and saw the important work of bringing the joy of reading to children of the area.

The third year I manned the Green Room and met authors I never dreamt I would ever come in contact with....

The fourth year and I was suddenly on the stage as an author...what a thrill.

The fifth year ... again I will be on the stage  as an author and in the audience listening and learning. The whole time making sure I relish every moment of this fabulous event.

Today the Irish cookery writer, Rachel Allen, asked for my advice on what to see and do...and I said be daring and go to a session that your not sure about for that is when the magic happens....a whole new world opens up.

The other big joy of today was that I held in my hand for the first time the mass market (small) paperback of The Cornish House. It will be on sale here at the festival a full month before it is officially released! 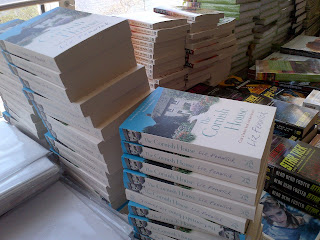 Finally my pictures from today are here
Posted by Unknown at 1:58 PM 1 comment:

Alison Morton Shares Her Thoughts On Reading To Explore 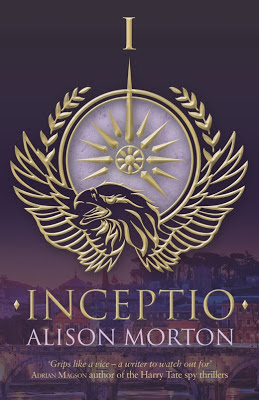 Fellow expat Alison Morton whose debut novel, Inceptio, is out now shares her thoughts on why we read.....

Why do we read? Often the answer is to experience how others acknowledge, deal with and recover from a challenge in their personal and professional lives. We want to share and perhaps learn from their dreams and struggles. More than anything we want to share their passion, their excitement, perhaps their fear, as they discover the kernel of their own humanity. But aren’t there only seven basic stories? Why then do we read an eighth, ninth or tenth one?

For me, the reason is to explore something different, whether it’s setting, theme, viewpoint, genre or language. Something may jolt me, arouse my curiosity, make me smile or even laugh aloud, or push me into changing a view I thought fixed. Every reader has been handed a book by a friend, glanced at the back cover and thought ‘This is not for me’ but smiled politely at the friend and thanked her. And one day, you pick it up and open it, thinking you’ll read a few pages just to see what motivated your normally sane friend into buying it. Several hours later, you put it down, numbed, entranced, exhausted, uplifted, the different world having invaded your head.

So it is with writing. Reaching into the past means not only researching a period in meticulous detail, but getting inside the heads of the characters, imagining what they see in their everyday world, what they smell, eat and touch. If you set your story in a different country, you apply the same process, but at least you can visit the places the characters would live in, smell the sea, touch the plants, walk under the hot blue sky, or freeze in a biting wind.

But if you invent that country, then your task is doubled. You have to get the geography right. Were you asleep in class when Mrs Turner did rainfall in Africa or the mountains that stretch across Europe? Now is the time to catch up on the history of the region around your imagined country.  Next, there’s the social, economic and political development; this sounds dry, but every living person is a product of their local conditions. Their experience of living in a place and struggle to make sense of it is expressed through their culture. It’s an easy comparison, but J K Rowling is said to have filled notebooks with details of Harry Potter’s world, only a small proportion of which appeared in print.

The key is plausibility. Take a character working in law enforcement. Readers can accept cops being gentle or tough, enthusiastic, intellectual or world-weary. Law enforcers come from all genders, classes, races and ages and stand in different places along the personal morality ruler. But whether corrupt or clean, they must act like a recognisable form of cop. They catch criminals, arrest and charge them and operate within a judicial system. Legal practicalities can differ significantly from those we know, but they must be consistent with that society while remaining plausible for the reader. But a flashing blue light, or an oscillating siren on a police car, is a universal symbol that instantly connects readers back to their own world.

Almost every story hinges upon implausibility – a set-up or a problem the writer has purposefully created. Readers will engage with it and follow as long as the writer keeps their trust. One way to do this is to infuse, but not flood, the story with corroborative detail so that it verifies and reinforces the original setting the writer has introduced.  Even though my book is an alternate history thriller set in the 21st century, the Roman characters still say things like 'I wouldn't be in your sandals when he finds out.'  And there are honey-coated biscuits (honey was important for the ancient Romans) not chocolate digestives in the squad room.

Another way to connect to readers when writing from an unfamiliar setting is to ensure the characters display normal behaviour. Human beings of all ages and cultures have similar emotional needs, hurts and joys. Of course, they're expressed differently, sometimes in an alienating or (to us) peculiar way. But a romantic relationship, whether as painful as in The Remains of the Day or as instant as Colonel Brandon when he sees Marianne in Sense and Sensibility or the careful but intense relationship of Eve Dallas and Roarke in J D Robb’s Death series set in 2057 New York, binds us into their stories.

My protagonist, Karen, is born and raised in the US (although not quite the same US we know) and arrives in the imagined European country of Roma Nova, founded sixteen hundred years before by Roman exiles. Experiencing culture shock and adaptation through her eyes adds another layer of exploring difference for the reader. Karen stumbles along an all too-familiar rocky path in her relationships, but her chief concern is to stay alive when a US government enforcer is hunting her – a classic plot familiar to hundreds of thousands of thriller readers.

Blending the recognisable with the unusual, whether an imaginary setting, an alternative version of reality, or crossing from one culture to another, or even all three, allows us to expand our choices beyond our usual ones and perhaps find new pleasures. 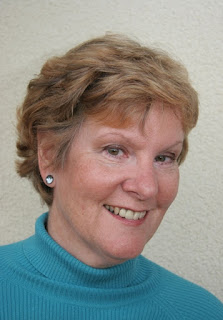 For more information about Alison and her books...