When CL Taylor Ran Away...

I was twenty-five when I ran away to Paris. I was living in Brighton and going out with a colleague - an alcoholic with a mean side. By dating him I’d ostracised myself not only from my other work colleagues who didn’t trust him but also from the friends who knew he was bad for me but couldn’t convince me to leave him (I foolishly believed that, if I spent enough time with him, I could help him overcome his demons).
Confused and desperate to get away to clear my head I scraped together what little money I had and booked myself a cheap flight to Paris and a room in a flea pit of a hotel. The plan was to spend a couple of days there alone but when a friend (who was also an ex-boyfriend) said he’d fly from Holland (where he lived) to Paris so we could hang out together I thought, ‘why not?’ I hadn’t seen him for several years, our relationship had ended amicably and he was good fun to be around.
The trip got off to an exciting start. I wanted to visit the graves of Jean-Paul Sartre, Simone de Beauvoir and Oscar Wilde so we went to Père Lachaise cemetery in the afternoon of our first day. It’s an astonishing cemetery and I found myself utterly mesmerised. We found the first two graves relatively easily but, as the sky grew dark and night approached, we slowly realised we’d been walking round and round in circles trying to find Wilde’s.

Finally we found it. I took a photograph and laid a flower on the tomb and then said to my friend that we should probably leave as we hadn’t seen anyone else wandering about for some time.
We headed for the exit.
It was locked shut.
We headed for the other exit, a good twenty minute walk around the circumference of the cemetery.
Shut.
We tried more exits.
Shut. Shut. Shut.
It was now so dark we could barely see three feet in front of us.
We were locked in Père Lachaise for the night.
Panic rose in my chest. It was February and bitterly cold. Even if we could find somewhere to curl up and go to asleep we’d be frozen by the morning. There was nothing for it but to go back to the main entrance and knock on the door of one of the houses we’d seen there.
We knocked. And knocked. And knocked.
No answer.
With no mobile phone to call for help (they didn’t work abroad back then) we had no choice but to sit on the pavement, light cigarettes and stare desperately at the closed gates in front of us as we tried to decide what to do next. The perimeter fence was high and, even if my friend gave me a foot up, I knew I didn’t have enough upper body strength to make it over the top. I was just about to go back to the house to knock some more when the enormous double gates in front of us swung open and a car, headlights on full, drove towards. One of us might have said “Run!” or maybe we didn’t need words. Either way, thirty seconds later we were on the other side of the cemetery, grabbing each other and laughing with relief.
Later that evening my friend told me he was still in love with me.
But that’s another story.

THE ACCIDENT
By CL Taylor

“Keeping this secret is killing me”

To the outside world Susan Jackson has it all – a loving family, a successful politician husband and a beautiful home – but when Charlotte, her fifteen year old daughter,  deliberately steps in front of a bus and ends up in a coma Sue questions whether any of it was real.
Desperate to find out what caused Charlotte’s suicide attempt, she is horrified by an entry in her diary – ‘Keeping this secret is killing me’.  As Sue spins in desperate circles, she risks everything to discover the truth and finds herself immersed in a shady world she didn’t know existed. The deeper she delves the darker the world becomes and the more danger she puts herself in.
Can Sue wake up from the nightmares that haunt her and save her daughter, or will ‘the secret’ destroy them both?
(to be published in the UK by HarperCollins/Avon, June 2014 and in the USA by Sourcebooks, June 2014) 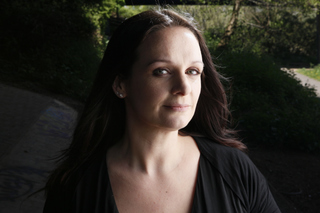 Email ThisBlogThis!Share to TwitterShare to FacebookShare to Pinterest
Labels: A Cornish Affair, CL Taylor, Running Away

Take a tent and sleeping bag(s) next time :)

Cheers Capt'n - good idea. Alternatively I might bother to check the closing time before going into a cemetery!

OMG! How scary! Even the thoughts of being locked in a cemetry are bad enough...mind you great material for a tale of some sorts...maybe..oh I dunno.... a ghost story?

Edith - there's definitely a story in there waiting to get out!